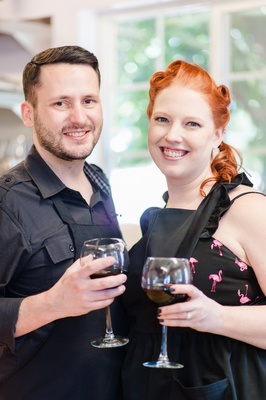 So who are the Geeks Who Eat? How did this site come about? Well let us tell you a tale, ok not really but this is where you will learn about us!

Sarah- Known in the blogging world as DC, Sarah started blogging at DAPs Magic in 2009. The focus was primarily Disney and other geeky topics but she wanted to write about more. After realizing that in addition to geek culture, her passion was food, Geek Eats was born. When it became apparent that writing for someone’s blog just wouldn’t be enough, Sarah made the tough decision to only contribute to Geek Eats. With the encouragement and support of Matthew, the Geeks Who Eat dream became a reality.

Matthew- Matthew didn’t know what was coming for him when he started dating Sarah. Little did he know that she would be dragging him into the world of social media (kicking and screaming) and food events! Matthew is the brains behind all of the tech of Geeks Who Eat. Web Developer by day and gamer by night, it was a natural fit. He also has a great eye for photography (especially food photography) and an amazing talent for making interesting and unique drinks.

The Geeks in the Media

Below are some links featuring articles about or mentioning The Geeks!

The Nerds Are Avenged: Phoenix’s 13 Biggest Super-Geeks Will Star at Fan Fusion– The Phoenix New Times

How did we get to where we are? It wasn’t without a bit of help! Below are sites and tools we love!

2 Replies to “The Geeks”