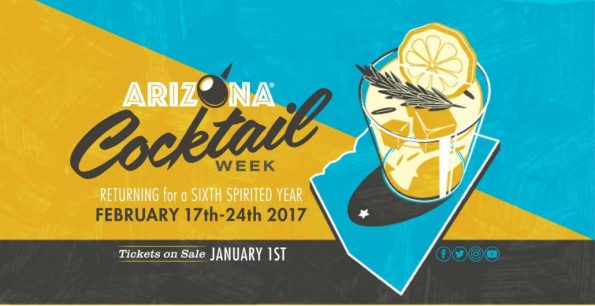 Arizona Cocktail Week is a week-long celebration of the craft of the cocktail that includes everything from parties, spirit tastings, and educational seminars, to cocktail competitions, drinks specials, and dinners.

The vast majority of the main events take place at the Hotel Valley Ho, in downtown Scottsdale, and in the general vicinity of the hotel.  Events are also planned at various locations in downtown Phoenix and in Tucson. Restaurant activations are planned throughout the week in the Phoenix Metro area.

Arizona Cocktail Week’s opening event, The Cocktail Carnival, is on Friday, February 17 and the preeminent festivities continue through Monday, February 20.

The remainder of the week, February 21-14, is filled with an assortment of special events for the local market.

Approximately 10,000 people participated in parties, tastings, dinners and activations throughout the week last year. Tickets, which are limited for all events, can be purchased at http://arizonacocktailweek.com/events/.

This seminar, presented by The Clever Root, will explore the potential culinary and beverage applications of cannabis, as well as offer an in-depth education into an emerging category in the F&B space. From the ABCs of CBDs, to responsible dosing and the basics of various extraction methods, this seminar will offer F&B industry professionals an inside look at the future of cannabis and its place in the hospitality industry.

Speaker: Randy Tarlow Liquid Alchemist.  When making your own bar, learn some of the tricks of the trade and helpful tips in creating your own mixology bar at home – from Syrups 101 to product selection to bar tools.

Speakers: Martin Cate (Smuggler’s Cove), Georgi Radev (Mahiki London) will discuss the past and present of the art of Polynesian Pop.  From the mugs, carvings, music, cocktails, and more, you’ll learn how the art of tiki shapes the complete guest experience.  You’ll sip on exotic cocktails while shopping at a bazaar filled with art by some of the most famous tiki artists living in the Southwest today. Sponsored By: Re’al Bar Ingredients and Don Q Rum.

Speaker: John Gozebekian – “Cold” brewed coffee has been hot over the last 5-10 years. It is not a new trend, it is a renewed one. Just because a coffee can be “cold brewed” doesn’t mean it should be. Get the facts on what makes a cold brew coffee, how it works and the benefits and drawbacks. Find out about the different types of cold brewed coffee, both “still” and “Nitro” infusions. Sponsored By Cult Coffee.

Some of the most creative, award winning bars have come out of London. And over the last two decades, it has become an international cocktail powerhouse. How did it get to this point and what has been the driving force behind it? In this British Invasion, we meet some of the biggest names in the cocktail scene from across the pond and get an inside look into it’s past, present, and future. And shed light on what has taken place for London to gain its edge and continued reign in global cocktail domination. Speakers: Declan Padraic McGurk from Savoy, Jake Burger (Portbello Gin), Simon Thompson (Callooh Callay), Georgi Radev (Mahiki London).

Cate is a rum and exotic cocktail expert. Owner and creator of Smuggler’s Cove, which features the largest rum selection in the United States and cocktails from over three centuries of rum history.

Radev is creator of the first UK Tiki festival called Spirit of Tiki. Works at Mahiki one of the top cocktail bars and nightclubs in the UK.

Abou-Ganim is widely regarded as one of the pioneering and leading bar professionals in the world.  He has made dozens of national TV appearances on shows including TODAY, Iron Chef America, Good Morning America, CNBC, Fox News and more.  Abou-Ganim is the author of The Modern Mixologist: Contemporary Classic Cocktails.

Rosario has spent 30 years of his life passionately pursuing the art of the crafted cocktail. Only by traveling across the globe, relentlessly seeking education and mastery did he earn the designation Master Mixologist.

Arizona Cocktail Week is the premiere cocktail event of the Southwest, celebrating cocktail culture and fine spirits through fun, interactive events, educational seminars and tastings, competitions and cocktail dinners throughout the state of Arizona.  Now in its sixth year, Arizona Cocktail Week was founded in 2012 as a result of Arizona’s growing cocktail culture and need for awareness in the community as it relates to spirits and the craft of the cocktail.

The vast majority of the main events take place at the Hotel Valley Ho, in downtown Scottsdale, and in the general vicinity of the hotel.  Events are also planned at various locations in downtown Phoenix and in Tucson. Restaurant activations are planned throughout the week in the Phoenix Metro area.

Hotel Valley Ho is a true icon in Downtown Scottsdale. Originally opened in 1956 and recently restored to its former splendor, this urban retreat blends mid-century style with modern amenities. Dine at ZuZu, relax at VH Spa for Vitality + Health, and unwind at two cool pools.