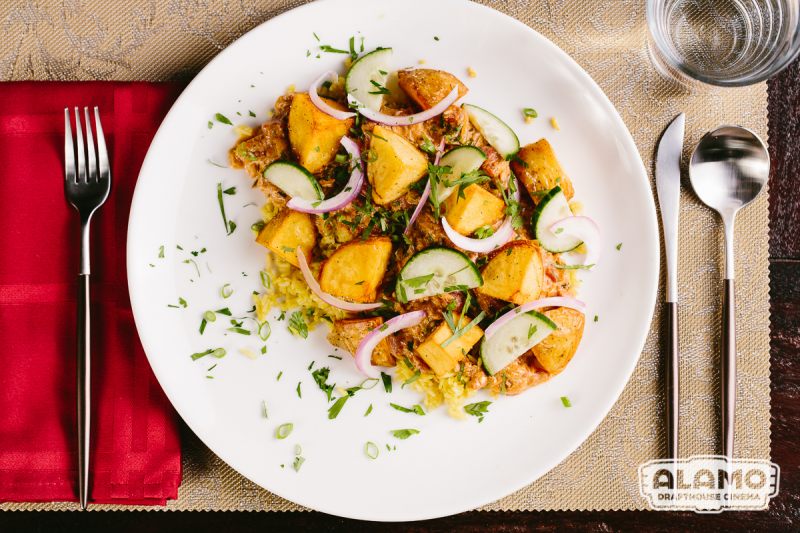 This month, Alamo Drafthouse Chandler will be offering a menu inspired by their Drafthouse Recommends selection The Big Sick. Produced by Judd Apatow and based on the actual (and unusual) courtship of comedian Kumail Nanjiani (SILICON VALLEY) and Emily Gordon (author, SUPER YOU). The film is touted as hilarious, emotional, touching and very, very honest.

This honesty shapes the culture clash of a Pakistani Muslim dating a Southern white girl, a narrative that places the Nanjiani family and their Pakistani culture at the heart of the film. To celebrate, Alamo Drafthouse’s chef Brad Sorenson worked with Kumail and Emily to create a menu that reflected the meals the two shared while dating and the rich, tasty and traditional dishes that would be served at the Nanjiani family dinner table.

For The Big Sick menu, my inspiration was really the writers of the film and their true-life experiences,” explains Alamo Drafthouse Chef Brad Sorenson. “Through conversations with Kumail and Emily and extensive menu testing we were able to find a menu that really represented what Kumail ate growing up around the family table and what is reflected in key moments of the film.  I love this movie, and I’m very proud of the menu that compliments it.”

Kumail and Emily further describe the huge role food plays in their film: “When we got together, we realized that the biggest thing our families had in common was food: big sprawling meals that required an extra table just to get every dish on the table. As we were writing The Big Sick, we wanted to make sure it communicated the importance of food in the lives of our families. The film features multiple scenes of families, new and old, Pakistani and Southern American, bonding over meals.”

Having our movie inspire a menu at the Alamo Drafthouse is a dream for us, and getting to eat Biryani in our favorite movie theater is the icing on top.” – Kumail Nanjiani & Emily Gordon (writers of The Big Sick)

The menu will be rolled out by the film’s opening date on Friday, July 14th with early shows on Thursday, July 13th. See the full menu below: