The Irish comedian teamed up with New Zealand’s Invivo Wines in 2014 and has sold more than 500,000 bottles of their 2015 Graham Norton’s Own Sauvignon Blanc By Invivo in Ireland, the UK, Australia and New Zealand since its release in October.

The inaugural Graham Norton’s Own 2015 Shiraz will be released this October and is a blend of grapes from South Australian regions Barossa Valley, McLaren Vale and Langhorne Creek.

Invivo co-founders Tim Lightbourne and Rob Cameron recently returned from Norton’s summer house in County Cork, Ireland, where they spent an afternoon tasting and blending samples for the Shiraz and the 2016 Sauvignon Blanc, which will be released in September.

Lightbourne, who is also Invivo’s Marketing Director, said there had been strong calls from customers to release a Graham Norton’s Own red wine.

We considered doing a Pinot Noir but a lot of our customers were after a heavier type of red and we also needed the volume to support that so we looked to South Australia,” he said. “We asked Graham if he would be keen to make a South Australian Shiraz, which he was really excited by, so we took six or seven samples from across South Australia and he chose his favourite blend. It wasn’t a hard sell for Graham, he knows the area and he was definitely keen.”

There are 18 wine regions in South Australia, including the Barossa Valley, Clare Valley, Coonawarra, Adelaide Hills, Langhorne Creek, McLaren Vale, Limestone Coast and Riverland. The state is consistently responsible for about 50 per cent of Australia’s annual production and is home to iconic brands such as Penfolds Grange, Jacob’s Creek, Hardys and Wolf Blass.

Cameron said coming to South Australia to blend a wine for the first time had been “fantastic” for the New Zealand winemakers.

There’s some of the most classic and famous wines in the world here – there’s so much quality, diversity and history so it’s been a great experience,” he said. 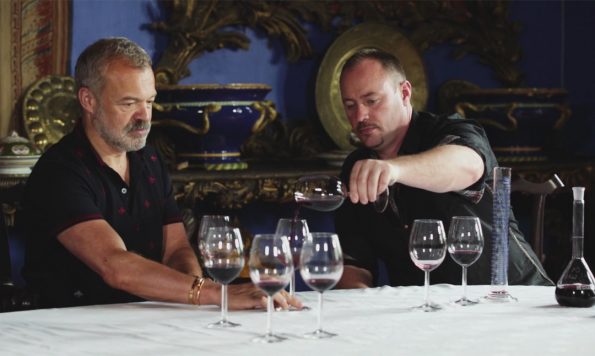 Norton described his new 2016 Sauvignon Blanc, which will also sell for about AU$20, as “easy drinking”.

It’s got all the grassiness and zest you expect from a new world Sauvignon Blanc but I like to think it has a bit of an old world finish – oh, and it’s affordable,” he said.

And what does he think about his new South Australian Shiraz?

Filmed in London for the BBC, The Graham Norton Show is in its 19th series since debuting on BBC Two in 2007. It has been broadcast on every continent across the globe.

The UK’s Independent newspaper named last year’s release number three in the top 15 Sauvignon Blancs in the UK.  Marie Claire magazine declared it “One of the most successful celebrity wine collaborations ever”.

Norton’s involvement with Invivo began in 2014 when he stomped their Sauvignon Blanc grapes on the set of his show. The stomped juice was taken back to Invivo at Te Kauwhata, about an hour south of Auckland, and added to the wine tank. The Graham Norton’s Own brand was well received in New Zealand, paving the way for the highly successful 2015 release.

The Graham Norton’s Own range is available in Australia at BWS.