Baseball Stadiums are typically known for their more extreme menus. Unlike a lot of those stadiums, Chase Field has vegan options! We’re not talking just a salad either. Intrigued by their vegan offerings, we dug a little deeper to find out why Chase Field decided to go outside the box and offer vegan options.

Turns out that the Diamondbacks’ team President & CEO Derrick Hall is vegan so every year they offer new vegan options in the ballpark. Derrick, along with his wife switched to a plant-based diet in 2011 when he was diagnosed with prostate cancer. We were able to ask Derrick about the inspiration behind the vegan items available at Chase Field. He has this to say:

It was definitely influenced by me and my lifestyle, as well as a motivation to have some of the best healthy food offered in sports. But it is also fair to say, that our chefs have bought in and have really enjoyed the challenge of creating unique options.”

During our last visit, we tried a few of the vegan options (please bring back the gardein fishless filets! We really wanted to try it!):

Kick’n Chick’n Wrap (Vegan): The Kick’n Chick’n Wrap is comprised of Grilled Gardein Chick’n, roasted corn, baby spinach, romaine lettuce, “Follow Your Heart” Cheddar cheese, tomatoes, pumpkin seeds, black beans, green onions and chipotle BBQ dressing. The wrap is very tasty and flavorful. However, be forewarned; if you are not a fan of mock meats, then this may not be for you. All is not lost though if mock meat isn’t your jam, as the wrap would be equally as good without the Gardein Chick’n.

Rey Gloria’s Green Corn Tamale: While the green corn tamales at Rey Gloria’s are amazing, the story behind them is even better! The tamale stand is owned by Rey Cota who began his association with Chase Field as a security guard! Through a series of events, he managed to get his tamales to Derrick Hall. Derrick enjoyed them so much, that the Diamondbacks actually put down the initial capital so Cota could follow his dream. 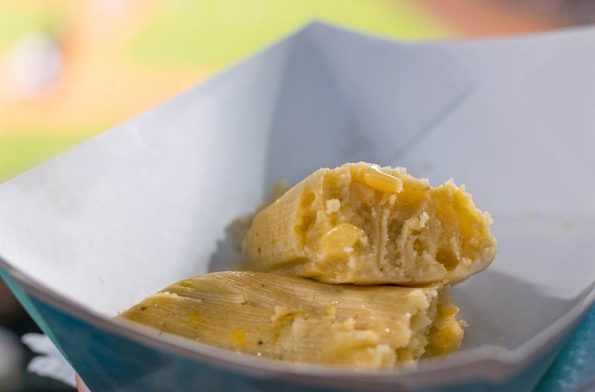 According to Derrick, the reaction to these items has been positive and there are plans to add more vegan items to Chase Field’s already large selection of food. We definitely look forward to trying out more of these vegan options! Where are some of your favorite vegan dining spots? We’d love to know! Leave a comment below or use the hash tag #GeekEats