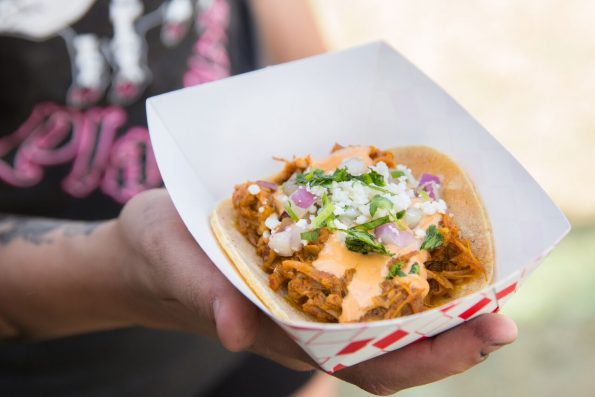 This October, prepare for one of the biggest and most exciting food festivals in the country held at Salt River Fields. Picture this: 50+ taco vendors slinging tacos left and right, lucha libre wrestlers battling it out for supremacy, top mixologists shaking up creative margaritas in a spirited competition, live music to dance the afternoon away, and a piñata safe zone to protect the gentle creatures, plus a heaping helping of fun in the Arizona sun. And that’s just for starters. The 8thannual Arizona Taco Festival will once again feed the taco lovers of the Valley on October 14 & 15, 2017 on the gorgeous grounds of Salt River Fields at Talking Stick.

With over 50 restaurants from across the state whipping up unique taco varieties ranging from chicken, pork, beef, and seafood to veggie, dessert, and everything in between, the Taco Competition takes place both Saturday and Sunday. Tasting and judging these taco masterpieces are 50 National Taco Association judges, who will dole out a $10,000 cash prize purse to winners. However, the Arizona Taco Festival celebrates the taco lover in all of us, so in addition to the competition, tacos are available for only $2 each to festivalgoers. Last year, the festival sold over 100,000 tacos to over 30,000 fans. In addition, salsa, guacamole and other Mexican-inspired fare round out the weekend for a true foodie fiesta. 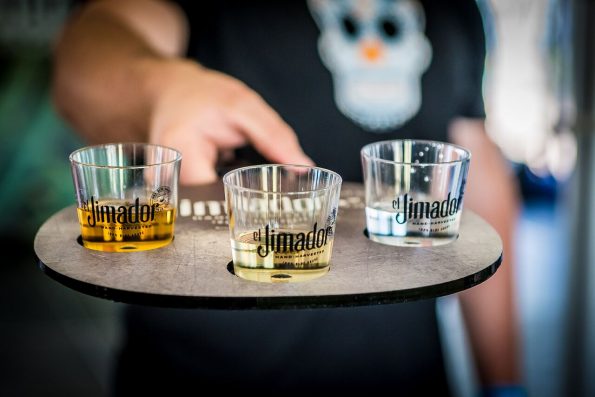 Nothing goes better with tacos than tequila, so hit up the Tequila Expo on Saturday or the Margarita Expo on Sunday, the latter offering patrons the chance to sample margaritas from some of the top Valley mixologists. In Saturday’s Tequila Expo, over 30 brands will pour over 100 tequila varieties to novices and aficionados alike. (Additional tickets are required for both the Margarita and Tequila Expos.) Don’t fret beer lovers, Estrella Jalisco, a craft Mexican cerveza, will be on hand, as well as Michelob Ultra for anyone reserving calories for all those tacos.

There is more to the Arizona Taco Festival than just taco tasting and tequila sipping, there’s also picture-perfect entertainment. Enjoy the Ay Chihuahua Beauty Pageant on Sunday, October 15 to see which canine will be crowned this year’s champion, or grab a seat for lucha libre wrestling shows all weekend long. If competitive eating is more your style of entertainment, watch professionals and amateurs test their stomachs as they compete in hot-chile pepper and taco eating contests. Keep the little taquitos happy in the Kids Zone, and teach them the power of love at the world’s only piñata petting zoo. The festival is a Piñata Safe Zone as there’s absolutely NO PIÑATA BEATING allowed throughout the weekend, plus the festival accepts donations to protect piñatas for www.savethepinanta.org.

Arizona’s favorite taco-centric weekend will also feature a new RFID cashless ticketing system. Attendees will now use RFID wristbands to purchase food and drinks around the event. After loading up a wristband with a set dollar amount, guests will simply tap the band to pay for a taco or beverage. The wristbands are reloadable, so it will be easy to get more tacos if your belly can handle it. The Arizona Taco Festival is one of the first food festivals in the Valley to institute this system.

Salt River Fields at Talking Stick is a state-of-the-art entertainment and sports facility that is the Spring Training home of the Arizona Diamondbacks and Colorado Rockies. The complex features over 15 acres of lush, green grass with beautiful panoramic mountain views. SRF hosts events throughout the year including the Arizona Taco Festival, Spooktacular Balloon Festival and the Larry Fitzgerald Celebrity Softball Game.

For more information regarding the 2017 Arizona Taco Festival visit www.aztacofestival.com.

About Arizona Taco Festival. The Arizona Taco Festival was founded by David Tyda and Rick Phillips of Affordable Food Festivals. They have a combined 40+ years experience in media, publishing, marketing and promotions. In reaction to high-priced, exclusionary culinary events, the duo formed a company that orchestrates festivals with three components: a culinary competition, low price of entry and original entertainment programming. They also produce The Taco Festival, a circuit of events modeled after the Arizona Taco Festival that take place in multiple cities across the country.