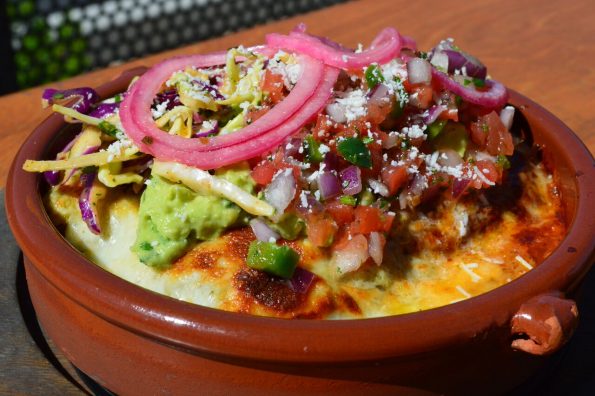 Aaron Pool, owner of Gadzooks Enchiladas & Soup, is excited to announce a second location of his popular fast-casual Mexican restaurant is coming to a prominent site in the heart of the Arcadia/Biltmore areas in late 2016/early 2017.  Carved into a triangular-shaped, canal-side lot just east of 40th Street on Camelback (4031 E. Camelback Rd.), this all-new Gadzooks will boast the same gourmet menu of bold, from-scratch Mexican favorites as the original midtown Phoenix location, highlighted by an infinitely-customizable selection of enchiladas made with cooked-to-order tortillas, slow-braised meats, vegetables, Mexican cheeses and a variety of house-made sauces and salsas. However, unlike the original Gadzooks (carved inside a revamped former auto repair shop), this new location will be housed inside a custom-built 2,100-sq.-ft. space, with an expansive al fresco dining patio and a dedicated off ramp welcoming people walking and biking along the adjacent Arizona Canal.
In fact, Aaron Pool says, it was this unique canal-side lot on Camelback that made this location so desirable, and also made the acquisition and approval of the new Gadzooks such an arduous, years-long process. “We found the site two years ago, loved the location right on Camelback and knew it had never been developed, so it was almost too good to be true.” Wedged between an existing residential condo complex and the still-working irrigation canal, “Naturally there were a lot of complexities with this site,” Pool says, “including easement issues with the canal because SRP has right-of-way access, as well as an obligation to the Federal government to maintain the canal’s operation.” However, as an owner-operator (along with his brother and partner, Jared Pool), Aaron had a leg up on previous potential developers, who, due to the limited commercial buildable space, “would have to charge rates way above market rate to earn back their investment.”
More important, Pool says, “We got lucky in that the previous owner had battled with SRP, so we actually had a common goal to get this done, which is unique. Plus, the city of Phoenix was only collecting annual property taxes and not any retail or other tax revenue on the site, so they were motivated.” And speaking of motivated, Pool kept plugging away to make the site work, despite repeated setbacks. “There were so many moments to back out, it really made us ask, ‘What’s our tolerance for risk?’ as we kept extending the escrow date and putting more skins in the game, knowing that if we hit a wall and had to walk away, we’d potentially lose six figures.” Worse, after seemingly endless hearings with the sellers, SRP and the city, and spending eight months working on renderings, “They kept coming back and shrinking the site, which made it really difficult to fit the puzzle pieces that we had to fit in place,” Pools says. “At one point a city planner told me, ‘You know, square plots are a lot easier to develop.'”

In the end, all parties agreed upon a 70-person, 2,100-sq.-ft. restaurant space – “Which is actually larger than our original location,” Pool says – and includes a Gadzooks first, a dedicated drive-thru to-go window. The building itself will feature Gadzooks’ signature grey and orange color scheme, with a colorful front awning and plenty of natural lighting from the oversized windows. That said, Pool says the new Gadzooks will “Cater to the Arcadia neighborhood by having the dining room flow seamlessly into a large patio overlooking the canal, which on weekends will allow people to have a more leisurely dining experience rather than dine and go. Plus, we’ll have lots of bike racks and invite people to ride right in from the canal with a wide, landscaped ramp dropping right into our parking lot.”
“We really wanted Gazdooks’ new location to be welcoming to the canal,” Pool says. “It’s ironic because while I was a student at ASU, I took a design class taught by a professor who was obsessed with the canals and wanted to develop the canals as an alternative focus from the traditional street grid. I never thought I’d get the opportunity and now I share that passion for beautifying the canal.” To accomplish this goal, Pool worked with SRP’s Matt Streeter to ensure Gadzooks will have lush landscaping without running afoul of the utility’s strict guidelines. “They said absolutely no trees are allowed along the canal, but otherwise were very open about us adding decorative landscaping.”
Even if you’re not coming from the canal, the new Gadzooks Enchiladas & Soup will be hard to miss, Pool says. “We are building a large marquee sign right up against the NE corner of the lot, so when you are eastbound on Camelback, it’s right at the top of the rise where the road goes over the canal, so you get nailed by the sign. You can’t miss it.”
As for why Pool chose the Arcadia area for the first of what he hopes are several new locations of Gadzooks, Pool says. “Downtown Phoenix seemed too close to our existing area, but we also wanted someplace that might be familiar with Gadzooks fans. Arcadia fit the bill because it’s close enough that many of our exiting customers work in midtown and eat lunch at Gadzooks. And there are lots of young professionals and young families, which is our target audience.” Finally, he says, “the only casual-attire canal-side dining option is OHSO right now. So we want to help expand on that canal-centric model for Arcadia and beyond.”
Gadzooks Enchiladas & Soup is located at 3313 N 7th St. in Phoenix and coming soon to Arcadia. Open Monday – Saturday (11 am – 10 pm) and Sundays (11 am – 8pm).www.gadzooksaz.com

Since opening in 2013, Gadzooks has received rave reviews and lines stretching out the door for its unique, infinitely-customizable menu of enchiladas made with cooked-to-order tortillas, slow-braised meats, vegetables, Mexican cheeses and a variety of house-made sauces and salsas. Assembled to order inside a handsome terra cotta cazuela, or Mexican casserole dish, each enchilada is then quick-cooked inside a gas-fired Wood Stone Oven, which uses a stone slab preheated to 575-degrees to perfectly brown the enchiladas and freshly-shredded cheese, before it’s topped to order and served piping hot. And as you may have guessed from the name, Gadzooks Enchiladas & Soup also serves up a tasty house-made tortilla soup, as well as street tacos, salads and fresh-baked desserts like pumpkin cookies topped with a brown sugar glaze, and a selection of beers and cocktails such as the Osborne Oro margarita made with fresh-squeezed ruby red grapefruit, lime and brown sugar simple syrup.

At Gadzooks, the secret to success is the attention to detail, including braising hundreds of pound of short ribs before settling on the perfect guajillo (a dried Mexican pepper) braise. All cheeses are shredded daily in-house, and three different types of proprietary masa meal (i.e. the tortilla dough) is fresh-made daily on-site and cooked-to-order. As for the wacky name, owner Aaron Pool says, “It’s a German expression popularized in classic comic books like Batman, so it doesn’t really make sense. But neither does a name like Yahoo or Apple. We just wanted it to be memorable.”