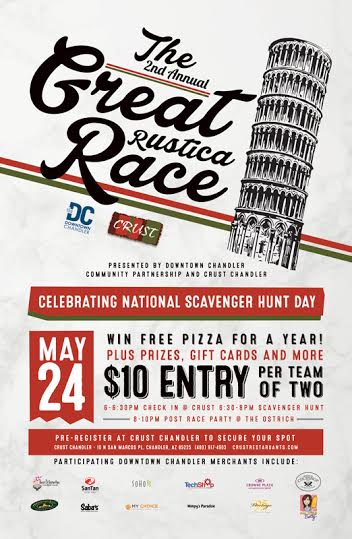 Double knot those laces and get ready to storm the streets of downtown Chandler during Crust Chandler’s 2nd Annual Great Rustica Race on Tuesday, May 24, 2016, from 6-10 p.m. In celebration of National Scavenger Hunt Day, teams of two will embark on the Great Rustica Race, collecting scavenger hunt items at participating locations for the chance to win free pizzas for a year and gift cards galore!

The top three teams with the shortest cumulative time will win prizes. The lucky first place winners will receive free Rustica pizzas for a year from Crust Chandler. Gift cards from Crust Chandler and other participating merchants will be awarded to second and third place champions. After the race, Crust Chandler will host a post-race party downstairs at the Ostrich, which includes complimentary pizza and soft drinks from 8-10 p.m.

Registration to participate in the Great Rustica Race is $10 per team, with sign-ups located at Crust Chandler, 10 N San Marcos Pl, Chandler, AZ 85225. $5 raffle tickets are also available to win merchandise/gift cards donated by local merchants. Space is limited and registration will be handled on a first come, first served basis. All of the proceeds from the raffle will benefit Kurt Warner’s Treasure House Foundation. For more information, visit:  http://crustrestaurants.com.

Armed with a solid list of family recipes, New York style ambition, and a passion for making deliciously authentic Italian food; Mike Merendino opened the first Crust location in 2007. Located in Scottsdale at the corner of Hayden & Indian Bend Road, Crust offers Arizonians the best east coast classic Italian cuisine. The comfortable and friendly neighborhood vibe is described as Simply Italian. By serving authentic family recipes, the true spirit of tradition and the love of Italian food and culture are served one dish at a time.