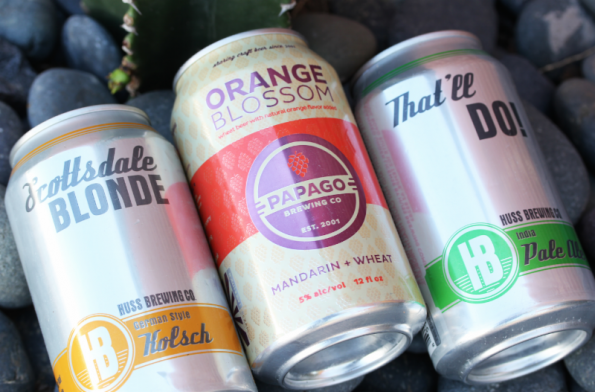 Huss Brewing Co., the award-winning quality lager and aleworks brewery based in Tempe, is proud to announce the acquisition of the landmark craft beer brand, Papago Brewing Company in Scottsdale. Led by the husband and wife team of Leah and Jeff Huss, Huss Brewing Co. was founded in 2013 and was already recognized as the state’s fastest-growing brewery and #13 in the nation among New Craft beer entries, according to the national research firm, IRI. Now, following the acquisition of Papago Brewing Company and its best-selling Papago Orange Blossom mandarin wheat beer, the newly combined Huss Family of Beers is forecasted to finish 2016 as the new #3 largest brewery in Arizona based on industry standard Nielsen scan data (behind Four Peaks and SanTan).

Most important,” says Huss co-owner Leah Huss, “acquiring the Papago beer brands ensures that the brand will stay in Arizona and not be bought by an out of state or international conglomerate.”

Founded in 2001 as a bottle shop, homebrew supply store and tasting room, Papago Brewing Company has grown into a local landmark, serving 30 beers on tap, plus a full menu of from-scratch foods out of a stylish space inside the Papago Plaza Shopping Center (7107 E. McDowell Rd., 480-425-7439). But due to space constraints, Papago has always outsourced the brewing of its beers to local breweries, including Huss Brewing Co, which has crafted each of Papago’s beers. The craft beer bar and restaurant was not part of the deal and will continue to operate and use the Papago Brewing name under license.

Huss Brewing Co.’s acquisition of Papago Brewing Company, which closed in late August for an undisclosed amount, was brokered by Los Angeles-based First Beverage Group, which also brokered Anheuser Busch’s acquisition of Four Peaks Brewing last December. However, says Ron Kloth, President of Papago Brewing, “Unlike many other of the big brewery mega mergers that have occurred over the last few years where global conglomerates come in and buy local breweries and say nothing will change, in this deal it is being kept local and is in the best interest of consumers, and yes, things will change. Papago first started out as a small homebrew shop, but as the craft beer market has grown, and the beer production side of our business has also grown dramatically, we realized Huss Brewing can support the Papago brand in the Arizona market better than we could, and this deal is just the next logical step for us to go in order to continue our business evolution.”

First Beverage was very pleased to work with Leah, Jeff and Chip on this transaction. Ron and the Papago team have built an iconic Arizona brand, and we know that the Huss team will grow it and treat it with the respect and care that it deserves,” said Ryan Lake, Director of First Beverage Financial. “As an Arizona resident, I look forward to seeing and experiencing the very bright futures of both Huss and Papago beer.”

Huss Brewing Co. Sales Chief, Chip Mulala says “this strategic acquisition positions the Huss Brewing Family of Beers for the foreseeable future. We can now effectively manage the growth of all of our brands under one umbrella. Arizona craft beer is growing at a rapid pace but maintaining consistency, quality and relevance is paramount. This deal makes sure all of this will happen across the board.”

As far as long-term goals for the expanding company, the Husses look forward to building a legacy for their daughter, while insuring a healthy and robust company that can compete in the ever increasingly saturated craft beer market. The addition of a new taproom at Uptown Plaza announced last month is just another piece of the plan. “I don’t want to be just another can on the grocery shelf, we’re trying to build something for our family and employees that will last,” said Leah Huss.

First Beverage Group is a full-service financial services firm dedicated exclusively to the beverage industry. First Beverage provides a comprehensive range of products, including investment banking and investment funds for growth capital to leading beverage entrepreneurs and operators.  Headquartered in Los Angeles with offices in Boston and New York, the First Beverage team is made up of senior executives with over 200 years of beverage industry experience.  For more information, please visit the company’s website,www.firstbeveragegroup.com.

Husband-and-wife, Jeff and Leah Huss, have over 20 years of combined experience in the brewing industry.  Jeff was head brewer for BJ’s Brewing in Chandler, Ariz., for seven years and attended the, Siebel Institute in Chicago, then, the Doemens Academy in Munich, Germany.  Leah co-owned and operated Papago Brewing in Scottsdale, Ariz., for 14 years, helping pioneer the craft beer community and growth in Arizona.  Their combined love and passion for craft beer inspired them to chase their dreams of owning a local, family-owned and operated brewery with Jeff acting as head-brewer, and Leah running business and marketing operations. In 2015 Huss brought on Arizona craft beer veteran, Chip Mulala, to head up sales and distribution throughout Arizona.  Huss Brewing Co. opened its doors in South Tempe in August 2013, with a 30-barrel system, a small tasting room with 20 taps, and room for growth.  Since then, they doubled brewing production capacity as one of the fastest growing breweries in the state. Their fresh, quality, canned beers are canned on site weekly including the brands: Scottsdale Blonde Kolsch, Magic in the Ivy Pale Ale, That’ll Do IPA, Koffee Kolsch, and Husstler Milk Stout.