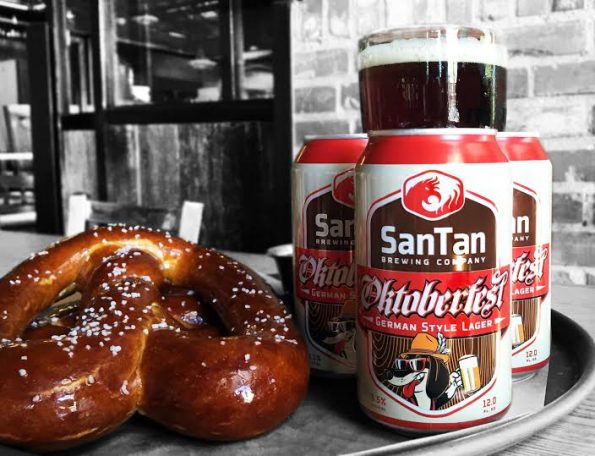 Oktoberfest made its debut in 2008 at SanTan’s first anniversary event. Today, it is Arizona’s longest running Oktoberfest brew. Now, in its ninth year – SanTan is set to celebrate with a brand new can in its fresh new look branding, but don’t worry, Otto the wiener dog is still featured front and center.

In 2014, SanTan Brewing released Oktoberfest for the first time ever in cans. From 2014-2015, SanTan saw a 14% increase in Oktoberfest sales within the Arizona market.* The brewery is looking forward to continued growth this year with a wider spread distribution across the Southwestern states.

We’re proud to be Arizona’s number one locally owned brewery and thrilled to celebrate nine years of business with a pint of our locally brewed Oktoberfest beer. Our efforts are a labor of love and we’re so thankful for everyone that has supported us and this brew over the years,” said Anthony Canecchia, founder and brewmaster, SanTan Brewing Company.

Brewed in the Southwestern Style, Oktoberfest Lager is a malty beer with a slight sweet aroma of caramel and spice. This craft beer pairs perfectly with bratwurst, schnitzel, soft pretzels and traditional fall spiced dishes that feature nutmeg, cinnamon and of course, pumpkin spice.

This fall seasonal will be available on draft and in cans throughout Arizona beginning on August 1, 2016 and coming soon to the southwest region.