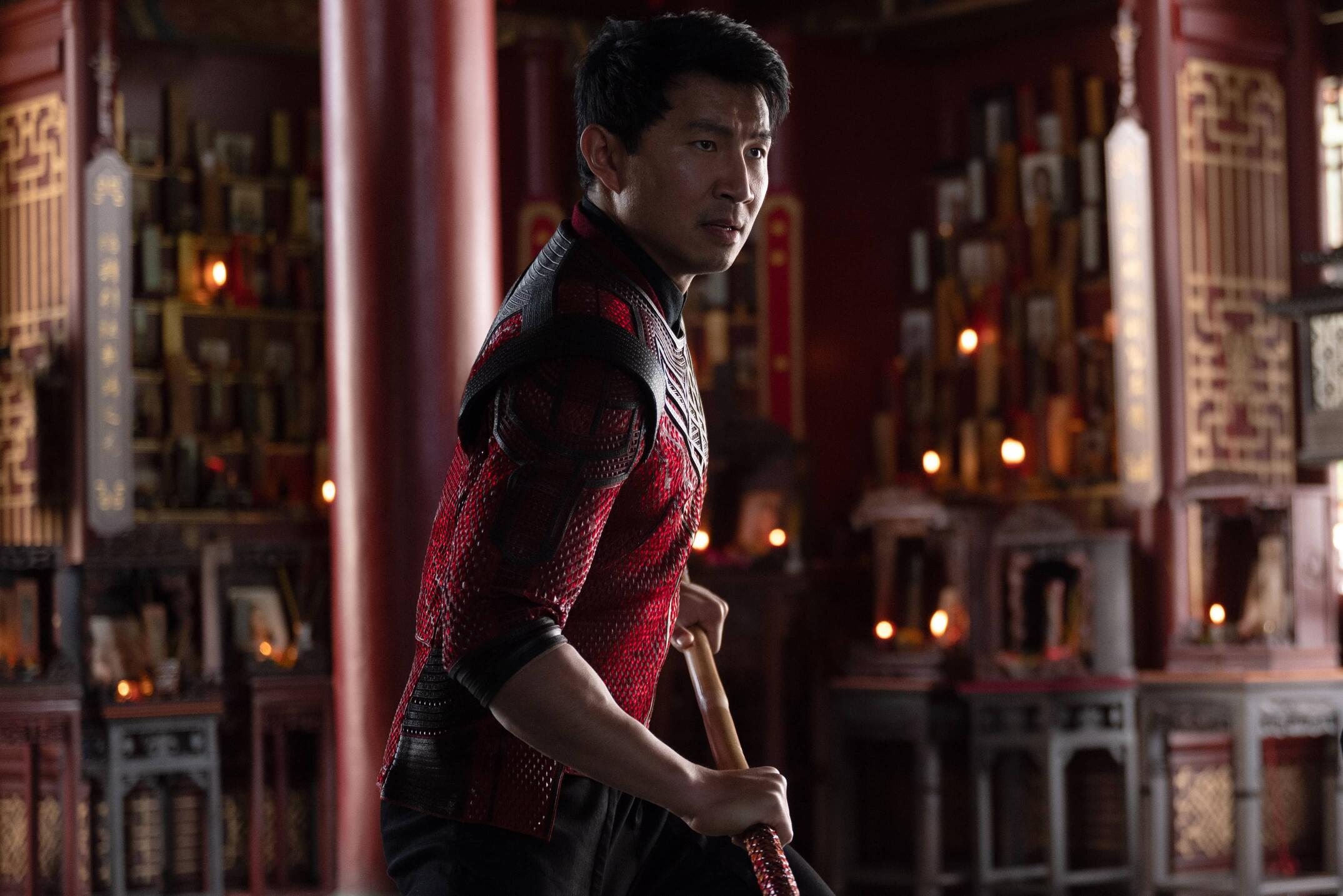 Shang-Chi (Simu Liu) in Marvel Studios’ SHANG-CHI AND THE LEGEND OF THE TEN RINGS.

Welcome to the newest part of Geeks Who Eat, Geeks Who Review! In creating our recipes, we watch a TON of movies. So we figured, why not use our existing platform to review them? What better way to start than with Marvel’s return to theatrical only releases, Shang-Chi and the Legend of the Ten Rings? We will be discussing overall themes in this review so if you want to go in completely blind, Let’s get started!

In Shang-Chi and the Legend of the Ten Rings, Shang-Chi must confront the past he thought he left behind when he is drawn into the web of the mysterious Ten Rings organization.

Have you ever wondered what it would look like if Marvel made a movie that was one part fantasy, one part adventure, and one part superhero film? Shang-Chi (shortened for brevity) takes you on a journey between the real world and legend. The film is absolutely gorgeous. However, it almost doesn’t come off as a comic book movie. Some would argue that is a good thing given that there is a bit of Marvel fatigue after the last 24 movies (if you are counting the Spider-Man movies), but it sort of strays a bit too far for those looking to get their Marvel fix. In fact, the final battle scene is somewhat reminiscent of the final battle in Disney’s latest animated release, Raya and the Last Dragon (which also starred Awkwafina) rather than what we’ve become accustomed to with films like Black Panther or Endgame. 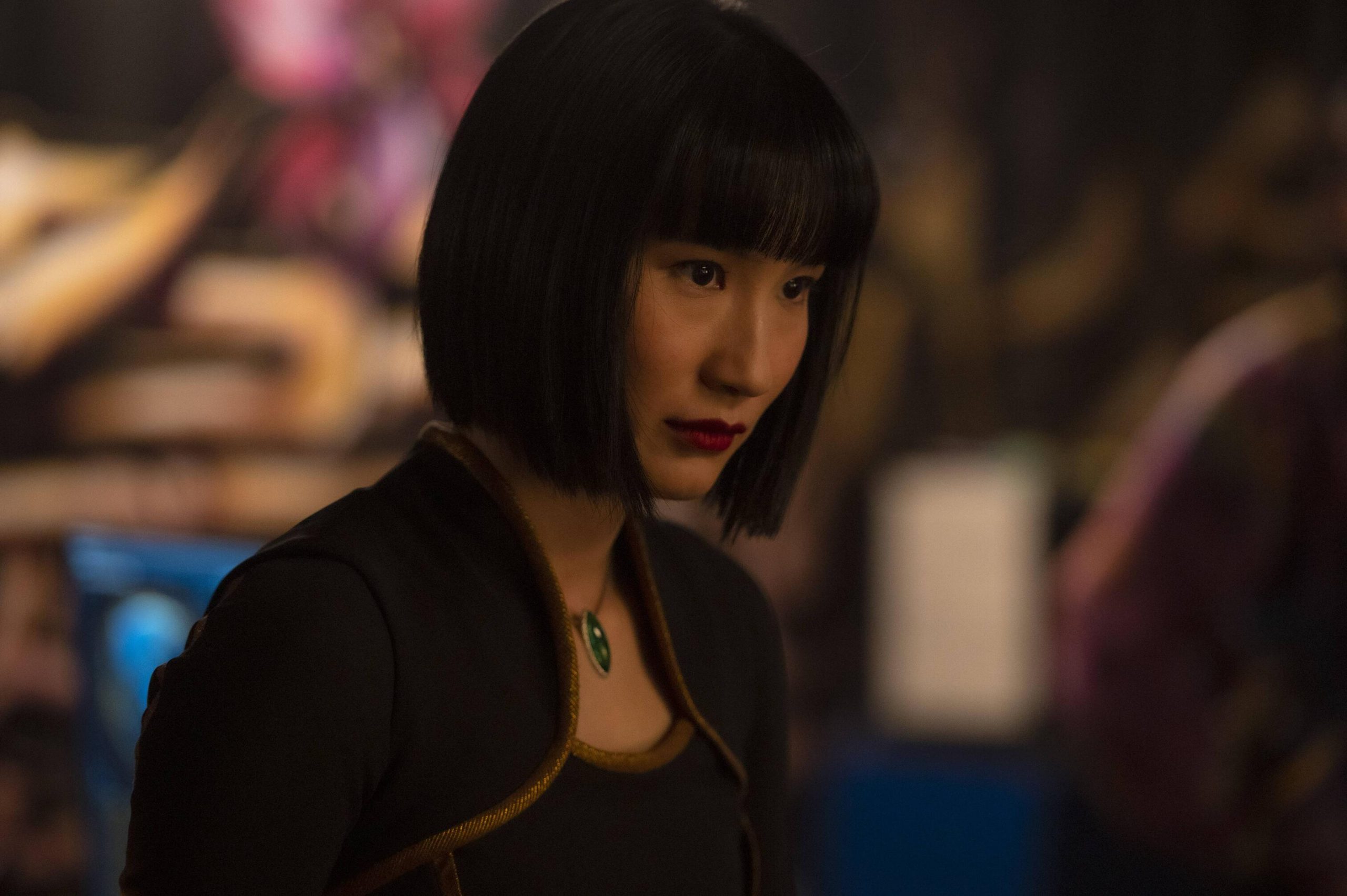 Xialing (Meng’er Zhang) in Marvel Studios’ SHANG-CHI AND THE LEGEND OF THE TEN RINGS.

Simu Liu is well cast as the titular character, however, the writing and story don’t build much connection to him. That is to say, you care about him because of course, he’s the main character but even the emotional points of the film just don’t hit as hard. After seeing how well the MCU shows like WandaVision or Falcon and the Winter Soldier handled themes of grief and trauma, Shang-Chi seems to not want to dig in too deep into those themes which makes the character less rounded than his predecessors (which was frustrating given the long run time). The female characters of the film, Katy and Xu Xialing (portrayed by Awkwafina and Meng’er Zhang respectively), fared a bit better with their character development. As always, Michelle Yeoh (joining the MCU for the second time) was incredible. Anytime she is in a scene, you just can’t take your eyes off of her. She exudes grace both while fighting and not.

Speaking of the female characters of the film, it was refreshing to see that similarly to Black Panther, the women had agency and Shang-Chi learned from them. They each had their own story and it felt as if their individual roles were important, instead of feeling like they were being used just as plot devices to further Shang-Chi’s story. Their fight scenes were among the best in the entire film.

Here is where we’ll be getting into some slight spoilers. The villains/antagonists in this film start out with some development but end up becoming mostly forgettable. Death Dealer and Razor Fist, both were vastly underused and could have been the antagonist in their own respective features. We felt similarly about Wenwu. It would have been far more interesting to see their antagonistic familial relationship carry over several movies instead of being rushed through just the one. While it’s understandable that this was an origin story to move Shang-Chi into the existing MCU, it would have been nice for him to have had more than one film to do this. Even a brief mention in other properties to set up his introduction would have been welcomed.

Keep your eyes peeled because there are some familiar faces in the film that were fun callbacks to the previous phases of the MCU. It will be interesting to see if they are important later or are just for fun. Also, as usual, stay seated once the credits start to roll. There is a mid-credit scene as well as a post-credit scene.

Shang-Chi will be a divisive film for Marvel fans. Those who want the MCU to feel the same while adding new characters may struggle, while those who want it to veer off the path it has been on will probably really enjoy the film. It definitely feels more like a martial arts film than a superhero one and fans of that genre will likely be on board. Shang-Chi is by no means a bad movie. In fact, it is a lot of fun and we did enjoy it despite our critique of it. We encourage people to go see it and support it because the representation it brings to the table is so important right now in the movie industry and we want to see more in Hollywood. We can’t wait to see how this movie and character connect to the rest of the current MCU phase!

One Reply to “Movie Review: Shang-Chi and the Legend of the Ten Rings [Mostly Spoiler-Free]”