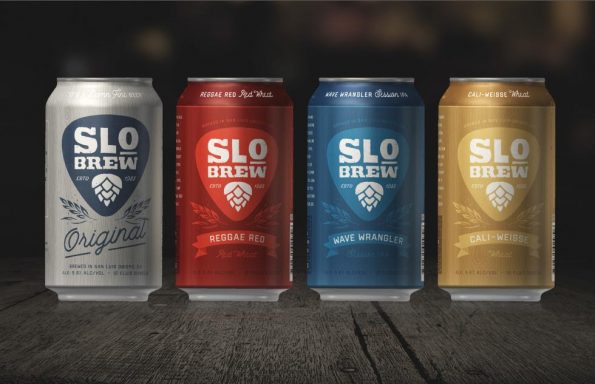 With a history that spans over decades and multiple awards, SLO Brew is proud to announce the appointment of Steve Courier as SLO Brew’s full-time Brewmaster.  A true original, Courier has been a part of the SLO Brew family since 1997 but previously split his time between SLO Brew and Firestone Walker Brewing Co. With more than a decade’s worth of intimate knowledge in SLO Brew’s style and flavor, Courier will oversee brewing operations at SLO Brew’s gastropub, The Brew, and its new brewing facility, The Rock.

We are excited to have Steve on board on a full- time basis and with the new brewery coming on line he’ll be busy,” said Rodney Cegelski, co-owner. “We will be focusing our production on cans at the new facility as we are confident that they are the best match for our target customer – easy to take to the beach, for tailgating or camping,  you can’t beat cans for portability, quality and sustainability.”

With a Criveller rotary canning line and a 30-barrel capacity at The Rock, Courier will be expanding production of SLO Brew’s most popular and award-winning craft beers to 2,500 barrels in the first year and 5,000 barrels in the second. He will also be introducing specialty and seasonal brews on a regular basis. Starting locally, SLO Brew plans on distributing its core year-round craft beers in 12-ounce cans, including:

The Original.  SLO Brew’s Original is just that – its first born! The Original is an approachable beer that showcases SLO Brew’s passion for brewing since 1988.  The perfect balance of malts and hops creates a crisp, refreshing and easy-going blonde ale with a clean finish. ABV 5%; IBU’s 25; Gravity 11.8°

To honor one of its original investors, SLO Brew will be donating a percentage of every can of SLO Brew Original Ale that is purchased to the Tom Adamski Foundation, which provides design and technology scholarships that empower individuals to leverage digital media to amplify brands and their connections with people.

The Reggae Red – Red Wheat. This one-of-a-kind ale was born at SLO Brew amidst the influential musical acts of California’s 90’s Reggae movement.  A harmony of three types of hops and seven different malts, including wheat malt for body and texture, makes Reggae Red an earthy and layered crowd pleaser.  But what really sets it apart is the dash of roasted hemp seeds that impart a unique nutty character.  ABV 5.6%; IBU’s 30; Gravity 12.2°

Cali-Weisse – Wheat.  Cali-Weisse can be considered a second cousin to German Hefeweizen.  SLO Brew toned down the classic German banana and clove character and added a touch of bright hop flavor, giving it a smooth, distinctive California style that is perfect with a slice of lemon.  ABV 5.4%; IBU’s 15; Gravity 13.5°

About SLO Brew
Since 1988, SLO Brew has been an integral part of San Luis Obispo’s cultural scene, brewing award-winning craft beers and regularly featuring performances from both local and internationally recognized artists. Today, SLO Brew is composed of three venues, The Brew, The Rock and The Lofts, giving the community more options for entertainment, accommodations, eating, drinking and hanging out. While The Brew will maintain its local spirit by serving up gastropub fare and intimate shows, The Rock offers expanded brewing and canning capacities as well as a tasting room, beer garden, restaurant and a concert and event space. The Lofts feature contemporary one-, two-and three-bedroom suites perched directly above The Brew.  Together, the three venues offer a complete experience that’s perfect for any type of night out or celebration.