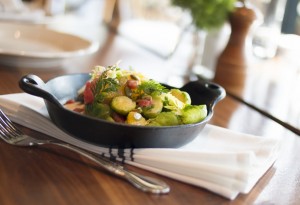 For those whose 2016 New Year’s resolutions include “eat more vegetables,” Southern Rail’s new winter menu selections celebrate the best and freshest in the Valley. The seasonal, veggie-driven menu features new renditions of some of Chef Justin Beckett’s signature dishes and healthy-ish versions of Southern staples. Eating your vegetables has never been so easy…and delicious.

“People have a misconception that all Southern food is heavy and artery clogging, but really, modern Southern cooking is about celebrating local, seasonal produce and heritage grains,” says Chef Justin Beckett, “so I’ve been playing with the healthy-ish side of Southern food.”

In creating the new menu, Chef Justin Beckett was cognizant of creating dishes full of flavor, without the heaviness often associated with Southern cooking, “I wanted to prepare dishes that enhance, not bury the flavor of the local ingredients.”

With this in mind, Chef Beckett has taken his Beckett’s Table signature fire roasted brussels sprouts and given them a Southern Rail twist, pairing them with in-season beets and squash, and topping them with black pepper crème fraiche, toasted pumpkin seeds for crunch, and local grapefruit to really brighten the dish.

Grapefruit makes another appearance in Southern Rail’s avocado toast: Noble bread topped with mashed avocados, grapefruit, and sprouts. The SR version gets a southern twist with a chicken-fried chili topping to give it a little kick.

Chef Beckett also wanted to add a pasta dish to the menu, “it’s not traditionally Southern, but home-made pasta is one of my favorite things on earth, and I’ve had this mushroom dish on my mind for a while.” He uses mushrooms prepared three different ways. First he dehydrates the mushrooms making a powder which he mixes into the pasta dough. Next he uses them in a broth for the sauce. Finally, he adds whole mushrooms to the sauce, infusing it with even more mushroomy flavor.

Also new to the menu, current veggie favorite, cauliflower, served with pesto, tomato puree and stewed apples, as well as inside a broccoli and rice casserole. 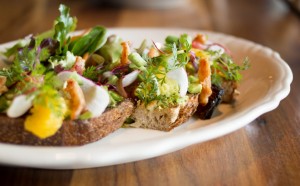 The following is a complete list of the new menu items which will debut on the Southern Rail menu on January 4.

Chef Beckett’s second restaurant is located ‘west of Central,’ in the adaptive reuse project, The Newton (also home to Changing Hands Bookstore and Southwest Gardener), in the heart of North Central Phoenix, and conveniently across the street from the Central/Camelback light rail station.

Visit Southern Rail for lunch, dinner and social hour specials daily, and brunch on the weekends, for healthy-ish southern fare in a vibrant community atmosphere.