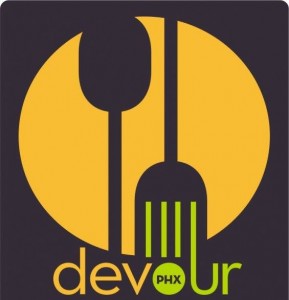 The nine finalists have been determined for Round 2 of the Devour Phoenix Bartending Competition, presented by Devour Phoenix and Local First Arizona as part of the Devoured Culinary Classic week of events. The competition will take place on Sunday, February 28, at 2:00 p.m. at the DeSoto Central Market (915 N Central Ave, Phoenix, AZ 85004). Finalists were selected in Round 1 with a two-week online voting process that concluded on Friday, January 29. The top nine vote recipients will compete in the final round for the title of Arizona Star Bartender.

Round 2 of the Devour Phoenix Bartending Competition will pit the finalists against one another in three heats, each mixing their best cocktail featuring local ingredients and spirits from Arizona Distilling Company and 3 Amigos Tequila. Once the results are in from the judges panel, the top three bartenders will compete in the Final Round, which will task the bartenders with creating a cocktail with local ingredients from a mystery basket as well as a selected spirit from Three Wells Distilling Company. The winning bartender will be featured in an exclusive mixology demo at the 2016 Devoured Culinary Classic, showcased on the website of Arizona’s own Bite Magazine, take home the Arizona Bartender’s Craft Kit valued at over $200, and be crowned with the coveted title of Arizona’s Star Bartender. Second and third place winners can also expect to receive Arizona’s Spirit prizes, including the newly-introduced Copper Cup and the Arizona Bartender’s Craft Kit.

The judges panel for this year’s Bartending Competition will include Brandon Casey, general manager of The Ostrich, President of the Phoenix chapter of the United States Bartenders Guild, and the 2015 Devour Phoenix Bartending Competition’s Arizona Star Bartender; Christina Barrueta of WriteOnRubee.com; Michelle Jacoby of Bite Magazine; Layla Linn of Arizona Cocktail Week and Alliance Beverage; and Aaron DeFeo of Casino del Sol and President of the Tucson chapter of the United States Bartenders Guild.

Devour Phoenix Bartending Competition attendees will also have the opportunity to sample and vote for their favorite cocktail, and the bartender with the most votes will win the People’s Choice Award. Attendees will be guided through the afternoon’s entertainment by emcee Ross Simon, the Principal Barman and Proprietor of Bitter and Twisted Cocktail Parlor, who will be calling the event in “Queen’s English.” Guests will also be treated to the musical creations of DJ Mr PHX.

The Devour Phoenix Bartending Competition is part of the Devoured Culinary Classic week of events. Tickets for the Devour Phoenix Bartending Competition are $40 and are on sale now at devouredphoenix.com/tickets. Tickets include cocktail samples as well as craft spirit samples and the ability to vote for your favorite cocktail.

Dustin is pure home grown talent blending cutting edge cocktails with experimental style. He is the marquee mixologist of Melinda’s Alley based in downtown Phoenix. He has a drive and passion for his craft and pushes the limits of the craft cocktail scene in the valley.

Titus is the lead bartender of St. Francis on Camelback. He’s a huge fan of Phoenix’s local community. He loves to innovate and surround himself with other creative people. Music, style, and art are some of the main themes that drive his craft.

Joshua James is a Phoenix native and co-owner of The Clever Koi on Central and soon to be Gilbert location. James has been featured in national and local publications for his creative cocktail program and emphasis on new school mixology and elevated classics.

Michael Liberatore is a pharmacy major to turned bartender. With plenty of restaurant experience, he decided to focus on bartending and the skills behind it. The tight knit community and face time with patrons is what makes the career perfect for his loud personality. He’s been known to say, “It’s an amazing creative outlet and who doesn’t love working with booze?”

Tanner is one of the opening bartenders from The Henry. He is 26, and Devoured would be his first bartending competition! He’s attended multiple spirit events and training, and is seeking to start attending and participating in competitions to come.

For over 18 years, Rob Moore has tended bar in 5 five countries and across 3 continents and geographies including Australia, England, Wales, Ireland, Scotland, New York and now Phoenix. Through the diversity of his travel and rich experience, Rob has gained an appreciation for pure and simply crafted cocktails. Rob has been a pillar of the Windsor bar program for the last 4 years, known and loved for his boisterous personality and revered for his extensive beverage knowledge.

Jillian Newman has been in the food and beverage industry for 14 years. Her passion for wine and spirits started when she worked for 5 years with the incredibly knowledgeable team at Sportsman’s Fine Wine & Spirits. From there, she went on to Lon’s at the Hermosa where, for the first time, she worked with highly innovative cocktails and house made ingredients. Today, she is the beverage director at DeSoto Central Market, implementing the practices of using fresh juices and house made ingredient in our signature cocktails.

Robert Porter has over ten years of professional bartending experience in the Phoenix area and is currently mixing drinks at The Thirsty Camel at the legendary Phoenician Resort. Early in his career, he mastered Tiki Cocktails at Trader Vic’s and then moved on to craft cocktails and mixology at The Sanctuary. Then, he spent some time developing his whiskey game over at Second Story Liquor Bar. He believes the best cocktails are made using fresh and simple ingredients, focusing on balance and creativity.

Zach manages and tends bar at the Welcome Diner where he focuses on keeping his craft local and handmade. Over the last decade, he has quickly worked his way from bar patron to floor mopper to drink pourer. He’s still mopping floors, but now he also oversees the beverage program at one of downtown Phoenix’s favorite late night spots. He loves his wife Starr, his dog Porter, neat booze, and heavy riffs.

Founded in 2003 by Director Kimber Lanning, Local First Arizona (LFA) is the largest alliance of independent businesses in the country, working to strengthen communities and local economies through supporting, maintaining and celebrating locally owned businesses throughout the state of Arizona. With over 2,700 members, LFA educates citizens, stakeholders, business leaders, and legislators about the significant environmental, economic, and cultural benefits of strong local economies. Visit www.LocalFirstAZ.com for more information.

Devour Phoenix is a city-wide, non-profit coalition of select, independent restaurants operating under the Local First Arizona umbrella. Devour Phoenix is working to maintain a forum for sharing ideas, purchasing power, and marketing dollars to advance dining in the Phoenix area; create an image for Phoenix that is a respected destination for dining and culinary exploration; share resources to strengthen and grow restaurants in Phoenix; manage and host events such as culinary festivals and restaurant crawls that will strengthen business and build awareness for all Phoenix restaurants and identify and encourage the use of local agriculture and local artisans as a means for increasing sustainability in the region.