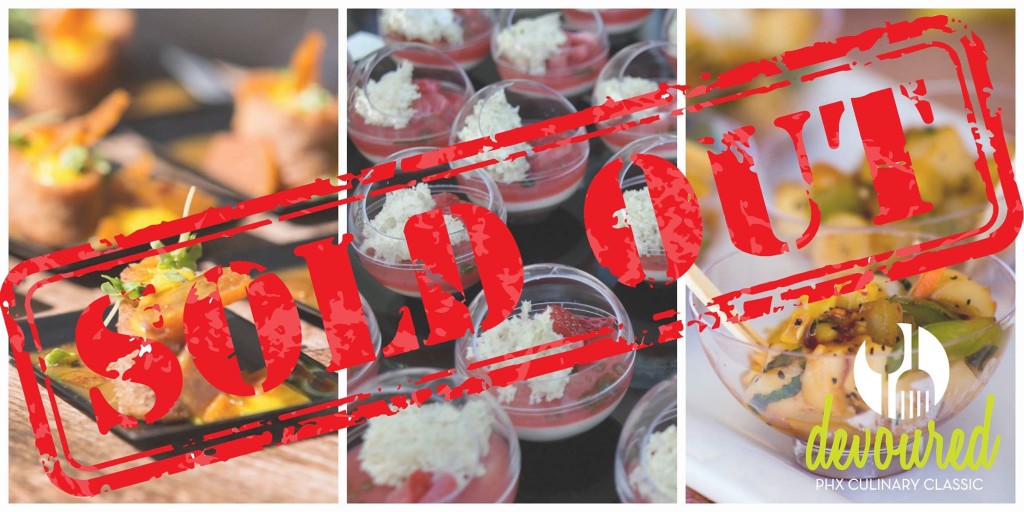 As of 11:00 a.m. on Thursday, January 21, all General Admission and VIP tickets for the Devoured Culinary Classic have sold out.

Phoenix foodies who missed out on tickets to the Devoured Culinary Classic can still enjoy the festivities of the expanded Devoured Week of events including the Devour Phoenix Bartending Competition, 7 Chefs Singh Along, and Palette to Palate.

WHAT: A showdown between nine of the Valley’s best bartenders to see who can come up with the best cocktail using local spirits from Arizona Distilling Company. Tickets include cocktail samples as well as craft spirit samples and the ability to vote for your favorite cocktail.

WHO: Round 1 contestants include: Joshua James of Clever Koi; Michael Soo of Crudo; Rob Moore of Windsor; Andrew Gilchrist of Hula’s Modern Tiki; Rachel Velasco of Joyride Taco House; Tanner Lips of The Henry; Zach Smith of Welcome Diner; Robert Porter of Thirsty Camel; Dustin Bolin of Melinda’s Alley; Titus Fauntleroy of St. Francis; Jillian Newman of Desoto Central Market; Mitchell Lyons of Rum Bar at the Breadfruit; and Brian Goodwin of The Gladly. The nine bartenders with the most votes at the conclusion of online voting on January 29 will move on to compete in the final event on February 28. Finalists will be announced on February 1, 2016.

TICKETS: Tickets are $40 each and available at http://devouredphoenix.com/tickets/. Attendees can purchase a combined tickets package to attend both the Devour Phoenix Bartending Competition and Palette to Palate for $60.

WHAT: The Seven Chef Singh Along is the fourth culinary event organized by the Arizona Seven, a collection of top Valley chefs dedicated to raising awareness of our world-class culinary scene and hopefully bringing the James Beard Award back to Arizona. During the wine-paired dinner, each chef will prepare a single course that highlights both their distinctive style, and the bold flavors of Arizona.

WHAT: An event that blends the visual arts and culinary arts by pairing chefs and painters to interpret each other’s work for a show that is at once unique and insightful into the worlds of the two artists. The evening will feature Arizona wines and award winning chefs, paired with regional artists who will be carefully selected and who will prepare new works for the event.

TICKETS: Tickets are $40 each and available at http://devouredphoenix.com/tickets/. Attendees can purchase a combined tickets package to attend both the Devour Phoenix Bartending Competition and Palette to Palate for $60.

More information about the Devoured Culinary Classic can be found at http://www.devouredphoenix.com.

Founded in 2003 by Director Kimber Lanning, Local First Arizona (LFA) is the largest alliance of independent businesses in the country, working to strengthen communities and local economies through supporting, maintaining and celebrating locally owned businesses throughout the state of Arizona. With over 2,700 members, LFA educates citizens, stakeholders, business leaders, and legislators about the significant environmental, economic, and cultural benefits of strong local economies. Visit www.LocalFirstAZ.com for more information.

Devour Phoenix is a city-wide, non-profit coalition of select, independent restaurants operating under the Local First Arizona umbrella. Devour Phoenix is working to maintain a forum for sharing ideas, purchasing power, and marketing dollars to advance dining in the Phoenix area; create an image for Phoenix that is a respected destination for dining and culinary exploration; share resources to strengthen and grow restaurants in Phoenix; manage and host events such as culinary festivals and restaurant crawls that will strengthen business and build awareness for all Phoenix restaurants and identify and encourage the use of local agriculture and local artisans as a means for increasing sustainability in the region.

We've got a great giveaway going over on Twitter f