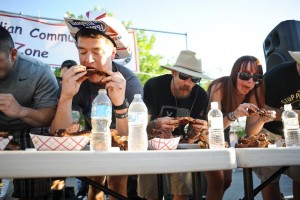 Prepare your bellies for Arizona’s largest BBQ event, The Great American Barbeque and Beer Festival, returning to downtown Chandler on Saturday, March 19 from noon – 10 p.m. This year, the 2016 festival will be bigger and better than ever with a newly expanded city stage and more than 30 pit masters from across the nation set to please the masses with their mouthwatering ribs, pulled pork, brisket, chicken and more.

Expect delicious grub from Smokehaus, serving their claim to fame, the Tri Tip Sandwich, which is hand rubbed, cut thick and served on a grilled French roll. Or try their ABTs, bacon wrapped jalapenos stuffed with mini sausages and cheese.

Other highlights include Porkopolis BBQ’s Red Neck Street Tacos, with pulled pork on a flour tortilla topped with jalapeño coleslaw and BBQ aioli.  Montana BBQ will have whole hog sandwiches on a Hawaiian roll topped with grilled onions and pineapple. Or enjoy their filet mignon wrapped in bacon on a stick.

If that’s not enough to get your tummies rumbling, check out the complete list of BBQ vendor menus packed with delicious grub at the Great American Barbecue 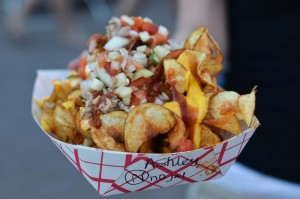 Headlining this year’s entertainment will be Granger Smith, best known for his hit single, Backroad Song from his 4×4 EP. Supporting acts include the Ben Miller Band, Zack Deputy and Georgia Chrome.

The seventh annual Great American Barbeque & Beer Festival will be held in downtown Chandler, spanning the entire east and west Dr. AJ Chandler Park – as well as the connecting Arizona Ave., which will be closed from Buffalo St. to Boston St. on Saturday, March 19, 2016.

General admission tickets are available online for $12 at www.chandlerbbq.com and $15 at the gate. Children 12 years of age and younger are admitted for free and all valley Bashas’ locations have discounted $10 admission ticket available.

A portion of the event proceeds will benefit the Boot Campaign, a 501(c)(3) dedicated to providing assistance to wounded military and their families with job placement and securing mortgage free homes, post-traumatic stress disorder counseling, adaptive clothing and much more. For more information about the Boot Campaign, visit www.bootcampaign.com.