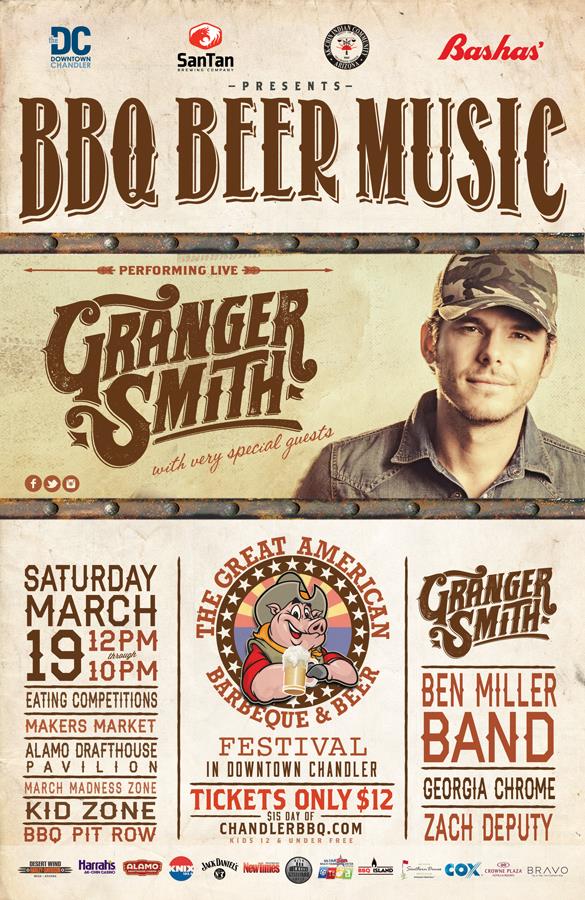 Can you smell what the pitmasters are cooking? This Saturday, March 19, 2016, Arizona’s largest BBQ event, the Great American Barbecue & Beer Festival, returns to downtown Chandler from noon – 10 p.m. with 20,000 lbs of BBQ, 200 kegs of craft beer and 20 bands.

Headlining this year’s entertainment will be Granger Smith, best known for his hit single, Backroad Song from his 4×4 EP. Supporting acts include the Ben Miller Band, Zack Deputy and Georgia Chrome.

To wash it all down, enjoy over 200 kegs of locally brewed craft beer from SanTan Brewing, including their new seasonal Grapefruit Shandy and everyone’s favorite Mr. Pineapple wheat beer.

The seventh annual Great American Barbecue & Beer Festival will be held in downtown Chandler, spanning the entire east and west Dr. AJ Chandler Park – as well as the connecting Arizona Ave., which will be closed from Buffalo St. to Boston St. on Saturday, March 19, 2016.

General admission tickets are available online for $12 at www.chandlerbbq.com and $15 at the gate. Children 12 years of age and younger are admitted for free.

A portion of the event proceeds will benefit the Boot Campaign, a 501(c)(3) dedicated to providing assistance to wounded military and their families with job placement and securing mortgage free homes, post-traumatic stress disorder counseling, adaptive clothing and much more. For more information about the Boot Campaign, visit www.bootcampaign.com.