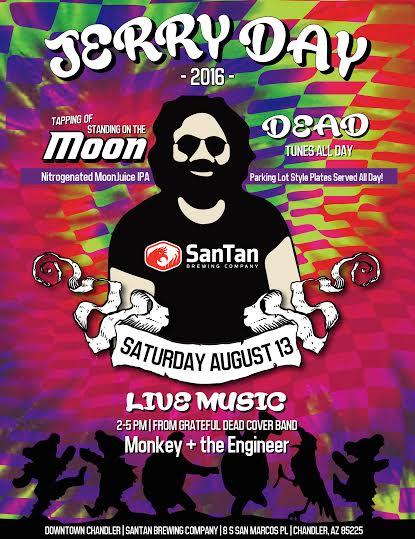 Deadheads get out your tie dyed shirt and join SanTan Brewing Company for its annual Jerry Day at the Brewpub! Set for August 13, 2016, Jerry Day is a birthday celebration of the legendary music and culture of the Grateful Dead front man, Jerry Garcia.

Jerry Day will feature a special tapping of “Standing on the Moon” Nitrogenated MoonJuice IPA. Plus, enjoy Dead tunes all day with live music from Grateful Dead cover band, Monkey & the Engineer from 2-5 p.m.

There is no cost to attend, so invite your friends through SanTan’s Facebook event page here: https://www.facebook.com/events/1108684355863145. SanTan Brewing Company is located in Downtown Chandler at 8 S. San Marcos Place.

About SanTan Brewing Company
Open since 2007 under the leadership of founder and brewmaster, Anthony Canecchia, SanTan Brewing Company has established a strong reputation as one of Arizona’s favorite craft breweries. In addition to brewing, SanTan features a friendly neighborhood brewpub in Downtown Chandler, which has quickly become one of the top local food and beer destinations in the Phoenix metro area.