Our BB-8 Bruschetta recipe is a Paid Promotion for Lucasfilm’s Star Wars: The Last Jedi.

We promised you two recipes for Star Wars: The Last Jedi, so here is our second one! Our typical style for recipes is a more literal type of recipe. However, similar to our Crait-Cakes, we have another fun recipe that is more design based. This time we are celebrating one of our favorite characters of the film. Our BB-8 Bruschetta is sure to impress not only the kiddos but adults as well!

In Star Wars: The Last Jedi, “With the destruction of the Republic, the evil First Order reigns. Now, Supreme Leader Snoke looks to crush what’s left of the Resistance and cement his grip on the galaxy. But hope survives: Rey has found Luke Skywalker, a legendary Jedi Master who can change the tide of war.”

Curious as to which extras are included with the Blu-ray release of Star Wars: The Last Jedi? We were too! Here is what is offered (Special Features on the digital release will vary by retailer):

But let’s get to what you came for, the food! Breakfast meets bruschetta with this BB-8 Bruschetta! In this recipe, BB stands for Bagel Bruschetta. These tasty little treats combine the best parts of an everything bagel, veggies, and everyone’s favorite BB Series Astromech Droid! If everything bagel seasoning isn’t your thing, you can easily switch it out for black sesame seeds.

We hope you love these adorable BB-8 Bruschetta! Star Wars: The Last Jedi is out now on Digital HD and Blu-ray! Be sure to check out our other recipe for Crait-Cakes! 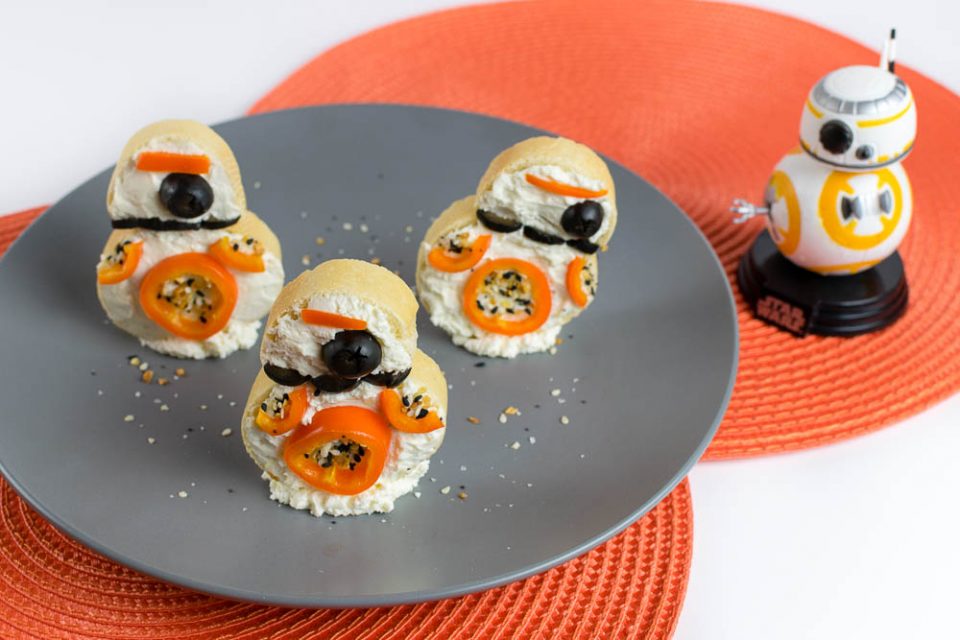 The Geeks have come up with a tasty and adorable way to celebrate the release of Star Wars: The Last Jedi, BB-8 Bruschetta!

*This is a Paid Promotion for Lucasfilm’s Star Wars: The Last Jedi; We were also provided with an advanced copy for research purposes.  All opinions are wholly our own. View our Disclosure Policy for more info.