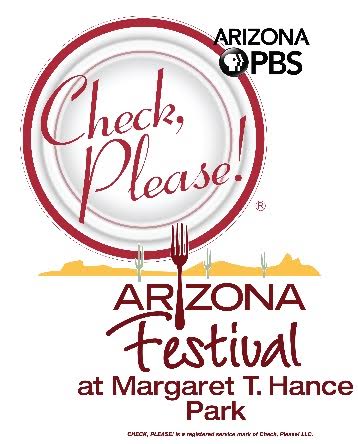 Tickets are on sale at www.azpbs.org/CheckPlease/festival.

More than 20 of Arizona’s independent local restaurants will be on hand, offering bite-sized samples, craft beer and wine tastings. In addition, a panelist stage hosts Arizona’s James Beard Award winners, along with two cooking demonstration stages: one showcasing some of the restaurants most recently featured on the award-winning “Check, Please Arizona” television show; the other featuring beloved “Check, Please! Arizona” show veterans and more.

The festival will be adding several new restaurants to the lineup this year from “Check, Please! Arizona’s” six seasons on air, as well as featuring many returning favorites including:

TICKETS: Tickets are available at www.azpbs.org/checkplease/festival. General admission advance tickets are $49 each through Feb. 29, and $59 from March 1 through March 19; tickets at the gate are $69. All tickets include food, wine and beer sampling as well as panel discussions, cooking demonstrations and guest lectures. NOTE: Last year, the event sold out.