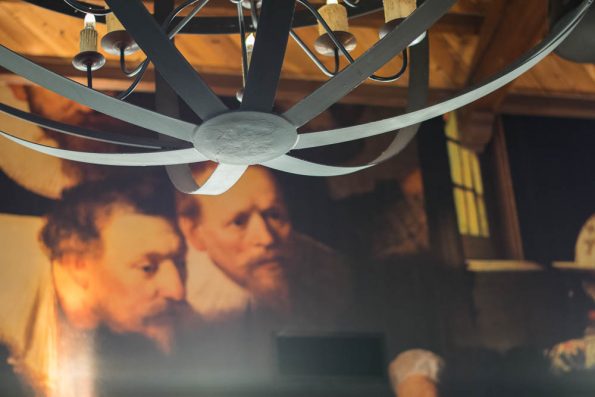 Typically when one dines in a restaurant, they don’t expect it to have a geeky reputation. Lucky for you, the reader, we do. We first heard about Taco Guild through murmurs within the Phoenix Comicon scene a few years back. It seems a group of authors formed The Holy Taco Church after author Sam Sykes declared his colleague and fellow author Kevin Hearne the Tacopope. They held ongoing meetings at Taco Guild, had a blog, and a website. Sadly, the website was no longer available when we looked for it. However, Taco Guild is still standing and serving delicious tacos, so the spirit of the Holy Taco Church lives on.

Located in Central Phoenix, Taco Guild is housed in a former church that was built in 1893 with a rebuild done in 1948. Still featuring original pews, stained glass, candelabras, and more, Taco Guild is not only perfect for foodies, but history lovers as well. It might be a bit awkward to wander around and look at everything, but it is well worth it. But really, as great as the history is, we know you’re here for the food! 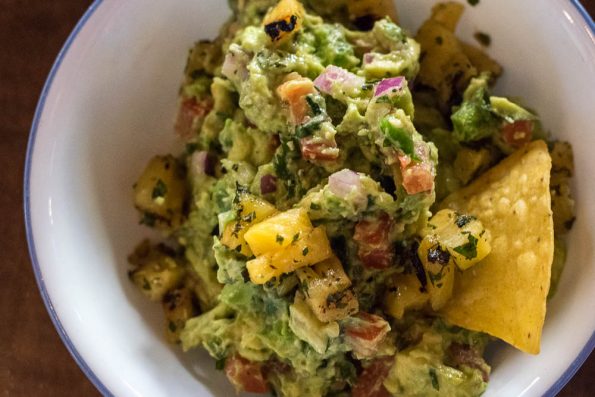 Before we get to the tacos, we need to discuss their guacamole. Sure, most taco joints have guacamole on their menu, so no big deal right? Wrong! Taco Guild offers 4 different kinds of guacamole, how they differ from most restaurants is in the fact that each order of guacamole is made to order. This means that you are enjoying probably the tastiest guacamole you’ve ever had short of making it yourself. We tried the Caramelized Pineapple-Mint Guacamole and were floored at how tasty it was. The ratio of pineapple to avocado was perfect, creating a flavorful guacamole that wasn’t too sweet.

It is no secret that we have a small (ok, huge) obsession with tacos. Taco Guild has a large selection of tacos that goes past your standard chicken or beef. Of course this meant that we had to try 6 different tacos instead of going the route of 3 of the same tacos. We ordered:

There is no bad taco at Taco Guild, it could even be said that if you truly like tacos you could order any of theirs and be completely happy with what you ordered. We loved all of our tacos but there were 2 that really did steal the spotlight: the Molido Lamb Taco and the Peking Duck Taco. Both are served beautifully, the lamb comes topped with a pile of sweet potato hay which creates a salty crunch and the duck has large chunks of fried brie on top (let’s be honest, they had us at brie). These tacos are also in our opinion the most unique tacos on the menu. The grilled vegetable taco was also quite surprising. We expected it to be tasty but we didn’t expect it to be so fantastic. The combination of the grilled vegetables and salty hummus made for a taco that even a devout meat eater could love. 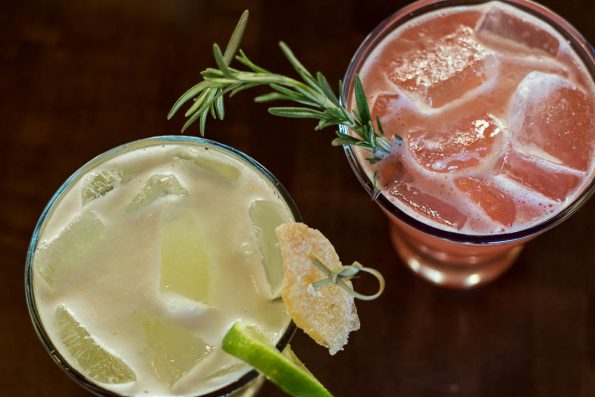 What would tacos be without a great drink to accompany them? Taco Guild offers some pretty legit cocktails that are perfect for enjoying with tacos. At the suggestion of our server, we tried These Boots Are Made For Oaxacan (Peligroso Anejo tequila, FruitLab Ginger Organic liqueur, Del Maguey VIDA mezcal, limes, and lemon) and Founder’s Guayaba (Herradura Double Barrel Reposado tequila, guava, rosemary, and limes). Both drinks, besides being delicious, had a sweet and smoky profile (These Boots especially). What was unique was that the tequila used in the Founder’s Guayaba is actually made for Taco Guild.

It really shouldn’t come as a surprise that we enjoyed our meal at Taco Guild. It is truly a triple threat: geek cred, historical significance, and delicious tacos. It is definitely a spot to not be missed and we hope they accept our challenge of creating a foie gras taco (we can dream right?!)! Where do you like to eat tacos in the valley? We’d love to know! Leave a comment below or use the hash tag #GeekEats!