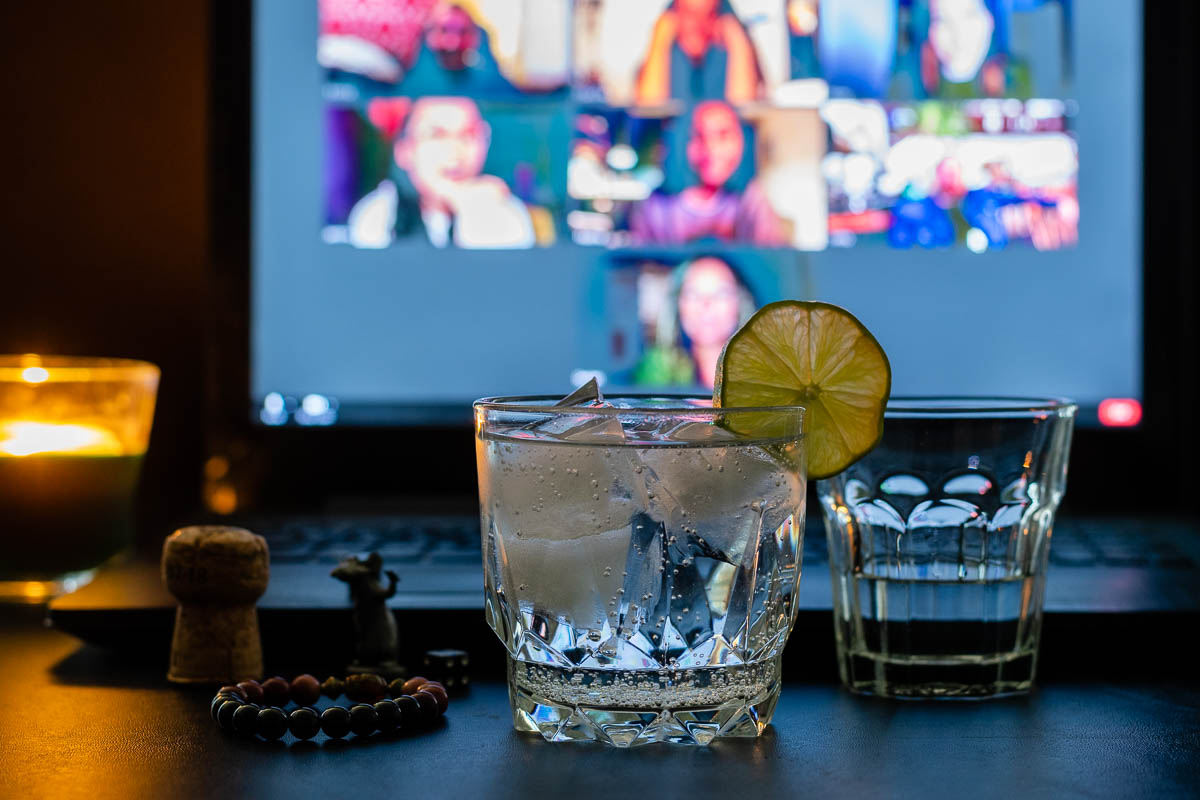 If you know us, you know how dear to our hearts found footage horror is. When we heard Shudder was releasing a new found footage horror movie called Host we were excited but cautiously so. It is a tough genre to do right. Fortunately, it turns out that this movie is one of the best examples the genre has to offer. It even has brief cocktail references so we knew we had to create something. I even tweeted the folks involved to ask about the spirits used. That was how we came up with our recipe for Teddy’s Gin and Tonic and Happy Spookies Shot! Not only that, but we have a cool interview with one of the writers and Executive Producer of Host, Jed Shepherd!

In Host, “Six friends hire a medium to hold a séance over Zoom during lockdown but get far more than they bargain for as things quickly go wrong. Host was shot remotely during quarantine and features practical scares, stunts, and surprises, all filmed by the actors in their own homes. Director Rob Savage (Dawn of the Deaf) never set foot in the same room as his actors at any point during production and instead directed them remotely. Starring: Haley Bishop (Deep State), Radina Drandova (Dawn of the Deaf), Edward Linard (The Rebels), Jemma Moore (Doom: Annihilation), Caroline Ward (Stalling It) and Emma Louise Webb (The Crown).”

As we mentioned above, we are so lucky that Jed Shepherd took the time to help us out with a quick interview which you can now read below!

Rob Savage, the director of HOST called me up and said he wants to prank our friends. So he showed me what he had planned and it was an elaborate bait and switch (you can see the original prank video on Twitter). Off the back of that, we got offers from numerous places for something longer. Rob and I frequent collaborators (and neighbours!) so I suggest a Zoom seance. Rob knew a real psychic which helped with the research and then we started to assemble our dream team!

12 weeks from conception to the day it landed on Shudder

Since I was a very young child. I was really the only kid in school (in south London) that actively advertised they were into horror. I would try to talk to other kids about Nightmare on Elm Street or Fulci and they didn’t really understand. The film that started it all was probably Evil Dead 2. I saw it on VHS and it blew my mind that someone had made a film that was so perfectly designed for me! That guy was Sam Raimi and now Rob and I are making a film with him. My favourite movie of all time is NIGHT OF THE COMET though, so please let people know!

I would just say, if you want to get into writing horror films, you just need to know your genre. You need to know what’s come before if you even want to attempt to make some original and interesting. Horror fans are the most intelligent fans out there and they can spot a fraud a mile off.

The various different Patrons (please sponsor me Patron). Patron Silver, Patron Anejo but most of all Patron XO Cafe. Inject that into my veins.

Also, can I just say THANK YOU for asking me these questions and best of luck with this! 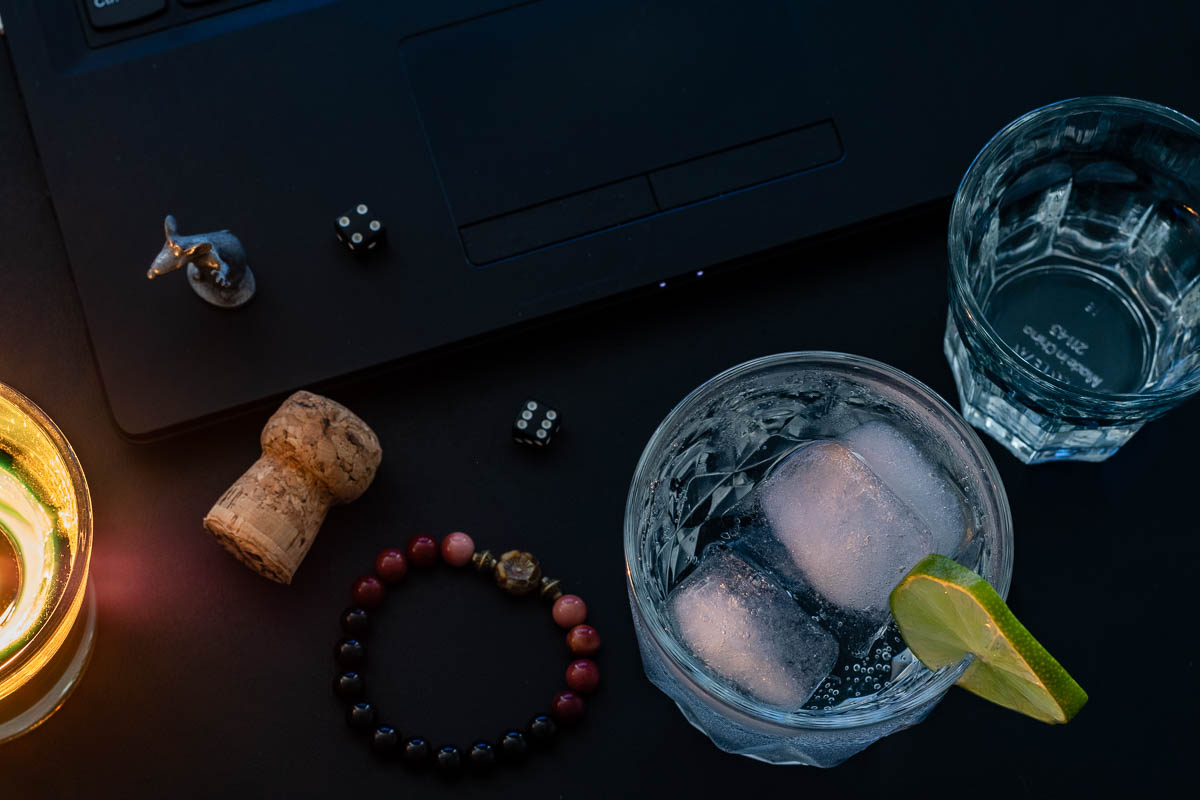 Without giving away too many of the details of the movie, our pairing of a Gin and Tonic and a shot of tequila may seem to not go together but it is actually something Teddy’s character drinks during the beginning of the film. We asked the writer about preferences and were told London Dry Gin for the gin and Patron for the tequila (see above). If you are looking for a higher-end London Dry Gin we recommend Bombay Sapphire. However, for a night of Zoom seances, Gordons is more cost-effective and still pretty tasty. In terms of tequila shots, we suggest Patron Silver because it is fairly smooth going down.

We really loved Host and want to thank Jed once again for taking the time to do an interview with us! We hope you enjoy making Gin and Tonics with a Happy Spookies Shot! We highly recommend lighting some candles, grabbing your token, making a drink, and watching. Have you checked out Host yet? What did you think? Let us know in the comments below! Happy Spookies!

Servings:  1 Gin and Tonic and 1 Shot 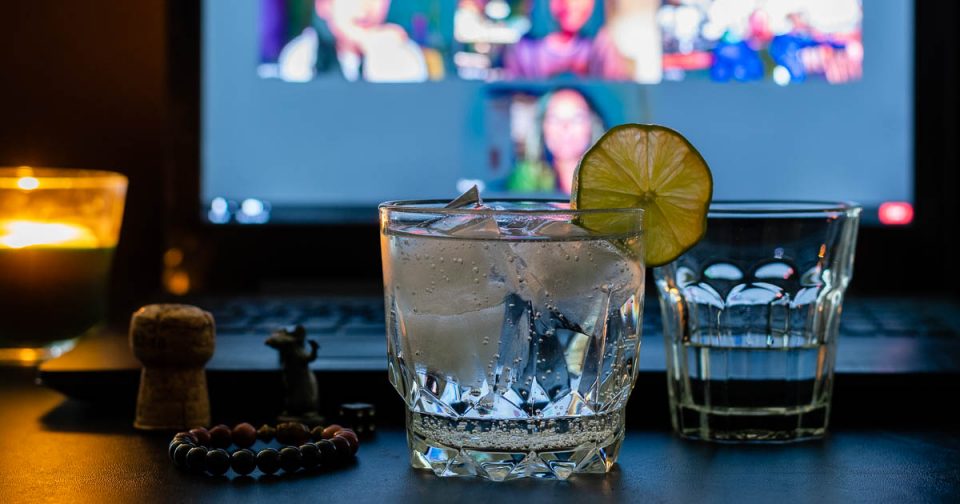 For Teddy's Gin and Tonic

For the Happy Spookies Shot