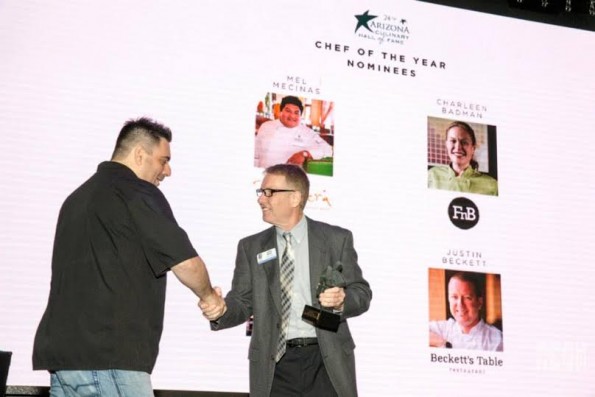 Save the date for the 25th annual Arizona Culinary Hall of Fame on Monday, March 28th. Presented by Scottsdale League for the Arts, this year’s star-studded soiree is going to be the biggest and best year yet with five newly added award categories! Local TV news personality, Jamie Cerreta, will emcee the evening’s ceremony bringing an upbeat elegance to the festivities.

Nominees for the 2016 Arizona Culinary Hall of Fame include:

Chef of the Year

Dushyant Singh, Artizen at The Camby

Restaurateur of the Year

Mixologist of the Year

Brewer of the Year

Winemaker of the Year

Food Truck of the Year

Food Writer of the Year

For the next couple of weeks, the voting period will be open to a select group of chefs, mixologists, media, farmers, organization leaders and board members who will vote for this year’s inductees. The voting body includes the Scottsdale League for the Arts membership, the food and beverage community, the Scottsdale Convention & Visitors Bureau, Phoenix Convention and Visitors Bureau and all past recipients of the Arizona Culinary Hall of Fame awards.

All winners will be announced live at the Arizona Culinary Hall of Fame on Monday, March 28, 2016. For more information and to purchase tickets, visit www.scottsdalefest.org.

All net proceeds raised will support the non-profit Scottsdale League for the Arts in its effort to promote arts and arts education organizations in the Phoenix metropolitan area, via annual fundraisers such as the Scottsdale Culinary Festival and The Friends of James Beard Benefit Dinner. Since 2002, the League has contributed more than $4 million to numerous organizations such as Ballet Arizona, Childsplay and Free Arts of Arizona.

The Scottsdale League for the Arts is a 501(c)(3), non-profit volunteer organization of accomplished men and women who support artists, arts programs and arts education through fundraising and special events. In order to offer continuous value and assistance to the arts, the League awards all net funds raised to a variety of arts focused organizations through a grants program. For more information, visit: http://leagueforthearts.org/.